You are considered to be one of the most beautiful actresses that Indian cinema ever had. Were you conscious of your looks from the very beginning?
I never realized that I was beautiful. But I always knew that I have a photogenic face. If I do good make up, get a good hairdo...and if there is good lighting, I look very nice in photos. However, I was not very conscious of my looks unlike today's generation of actresses, who are very smart, very focused. They always make sure that they look beautiful...get latest make up kits, designer dresses. Also, the lighting at photoshoots has become technically advanced too. The girls maintain themselves in such a way that I find all of them beautiful. (Smiles). 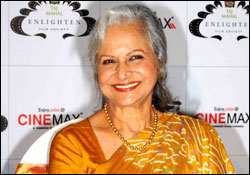 Despite belonging to an era when the hero had more prominence than the heroine, you managed to cut a niche for yourself...
See, there were only four films-GUIDE, KHAMOSHI, MUJHE JEENE DO and TEESRI KASAM-where I had very strong characters. Apart from these four, I didn't have much to contribute to all the big banner films I did, like PYAASA, KAAGAZ KE PHOOL...they were all director's films.

Your films are especially known for your dances. Can you remember a dance sequence that is really close to your heart?
The snake dance in GUIDE is really close to my heart. I had to rehearse a lot. It was really hard in those days...I had to go for rehearsals at 5 am; and after coming back home, I used to be literally drained out. But I could not relax because had to immediately leave for another film's shooting. In fact, GUIDE was a difficult film for me. For the fist time, I was handed a complete script and it took long to learn the lines. Also, that was the first time, when I played a character with grey shades...that was a risk for a heroine in those days.

Really?
Well, now-a-days things are more open...films have become progressive-technically, as well as subject-wise. Even the girls have come out of their cliched 'goody goody' selves...they are now ready to play negative characters. But 45-46 years back, when GUIDE was made, everybody, including friends and filmmakers, said I shouldn't have played that negative character. But I was convinced about my role. I just hope the film was released in today's time, then I would have got more appreciation.
Posted by Unknown at 19:42 2 comments: